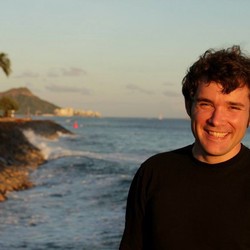 Mike Gowanlock is an assistant professor in the School of Informatics, Computing, and Cyber Systems at Northern Arizona University. He obtained his PhD in Computer Science from the University of Hawaii at Manoa in 2015, and was a postdoctoral associate at MIT Haystack Observatory from 2015-2017. Mike Gowanlock is interested in parallel, high performance, and data-intensive computing, general purpose computing on graphics processing units, astronomy, and astrobiology.

Astroinformatics: I am working on a Solar System event broker for the Large Synoptic Survey Telescope, the Solar System Notification Alert Processing System (SNAPS). SNAPS will rely on parallel multi-core CPU and GPU-accelerated near real-time outlier detection algorithms to detect interesting events on small bodies in the Solar System.

Astrobiology: I am interested in the regions of the Galaxy expected to have the highest carrying capacity for land-based complex life, and other astrobiological questions at large scales.

Data-intensive Parallel Computing Pedagogic Modules: Part of the NSF-funded project (Grant No. 1849559) includes pedagogic modules for teaching parallel and high performance computing using data-intensive applications. These modules can be integrated into courses at the undergraduate and graduate levels.

I would like to thank several sponsors for supporting my research, including NSF, NASA, AFRL, DOE, and ABOR.